Singer/Songwriter/Talk Show Host /Musical Playwright
Kathy Bee has performed for audiences both large and small across the U.S. singing a variety of musical styles. Her performances inspire members of the audience, reminding them to have a positive out look, to always keep hope alive, and to never give up, because God is always there!" Kathy Bee is
"THE AMBASSADOR OF AMERICAN MUSIC!"
Ms. Bee, a graduate of Nationwide Beauty & Fashion Academy is a producer, singer/songwriter, recording artist, musical playwright and TV show host. She’s charted Billboard, Cashbox and the independent music charts and has received numerous awards for her music and her musical productions. She’s performed nationally on the State & County Fair Circuit and in concert halls. As producer and host of the TV show, Touching Lives With Kathy Bee, she wears many hats. You'll even see Kathy behind the camera or editing.
Kathy Bee's Timeline
Bee's first professional gig was with The Flowers Family performing at state and county fairs throughout the midwest and the south.
Then Bee sang with Johnny Bernard and the Sunset Cowboys.
Later she formed her own group called The Santa Fe Junction and released her 1st Country single "I MISS YOU".
1979 she moved to Southern California and began writing and recording albums. Through contacts of her friend Jay Rosenthal, Kathy sang with the Steve Miller Band of "Fly Like An Eagle" fame. She met Mary Stevenson.
1982 Bee wrote, sang & produced her 1st album,
KATHY BEE SINGS.
1985 - 1988 Kathy received numerous awards from the California Country Music Association for Entertainer Of The Year Female Vocalist Of The Year Record Of The Year Song Of The Year
1987 Kathy met up with Johnny Paycheck and he signed her to his short-lived label.
1987-1997 Kathy sang at the NHRA (National Hot Rod Association) events. Her husband, Don Hampton is a former Drag Racer.
1988 was also the year that Kathy's single LET'S GO PARTY broke the Billboard, Cashbox and Indie National Charts.
1990 Los Alamitos awarded Kathy an Achievement Award for her cable TV show K.B. COUNTRY.
1992 was the year that Kathy's musical THE CHRISTMAS TOYS debuted at The William Bristol Theater in Bellflower, CA.
1993 the musical was a sell-out in Hawaii and its actors received two prestigious TIKI AWARDS.
Kathy worked with Bobby Helms in Myrtle Beach, South Carolina at Bobby's Special Angel Theater… If things had gone as plan Kathy was going to have her own theater called "THE QUEEN BEE THEATER". She enjoyed working with the late great Bobby Helms. READ THE STORY ABOUT BOBBY'S LIFE in the new book JINGLE BELL ROCK by David Davis and Lisa E. Brown.
Then in 1995 THE CHRISTMAS TOYS was a (sell-out) success for the GOLDEN STATE CHILDREN'S group who performed it at the La Mirada Theater in Southern California where it received The Rainbow Award for best actress. In Hilo, Hawaii it picked up the TIKKI Award for best actress! For ten years, THE CHRISTMAS TOYS has been warming the hearts of audiences of all ages. Kathy Bee hopes to produce a nation-wide TV special...
She cut two albums with Famous Producer/Songwriter
Lawton Jiles:
PATSY WE'RE STILL LOVIN YOU & LEGEND OF THE TABBY CAT
1998 Kathy hosted and produced her TV show TOUCHING LIVES that promoted "People Helping People" spotlighting singers, songwriters, actors, producers, entertainers, doctors, judges, lawyers, community leaders, writers, speakers, authors and everyday heroes…who made a difference in other people's lives. Touching Lives With Kathy Bee was been on the air for nine years with over 250 shows to her credit in 14 Southern California cities, with a market of approx. 280,000 household members.
1998 Madacy Entertainment Label re-released the album Bee's book FOOTPRINTS IN THE SAND "A GIFT FROM GOD"
I’M AN AMERICAN
2001 Kathy Bee completed her patriotic CD. From a small child, Kathy Bee has always been patriotic. This was displayed at the age of two, when she asked her mother to repeatedly sing “The Battle Hymn Of The Republic”. During her grade-school years, Bee accompanied her classmates on the piano, as they all proudly sang patriotic songs. She was deeply affected by the Viet Nam War, as she remained patriotic, while her only brother served and was injured in the Army. Years later, it was only natural for Kathy Bee to write her own patriotic song entitled “I’M AN AMERICAN”. Since then Bee has been touring, singing, hosting TV shows and stage events. Audiences of all ages love her music and the way that the music makes them feel...loved & that someone cares! 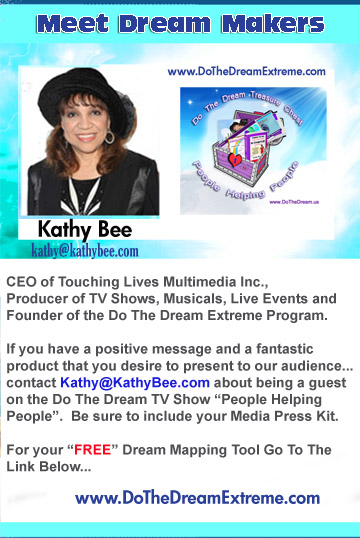